Jyske Bank runs a high, inherent risk of being abused for purposes of money laundering or financing of terrorism. The reason is our size as well as our business model, which involves a number of products and clients with high inherent risk.

Therefore our efforts to prevent money laundering and the financing of terrorism have been given the highest priority. We aim in all respects to prevent money laundering and financing of terrorism in order to fulfil the expectations of our clients, government authorities and society in this area. Such prevention is ensured through, among other measures, continuous training and education of employees, clear processes and guidelines, systematic monitoring and reporting

The Chairman of the Supervisory Board: Prevention of money laundering is more important that both earnings and advisory services 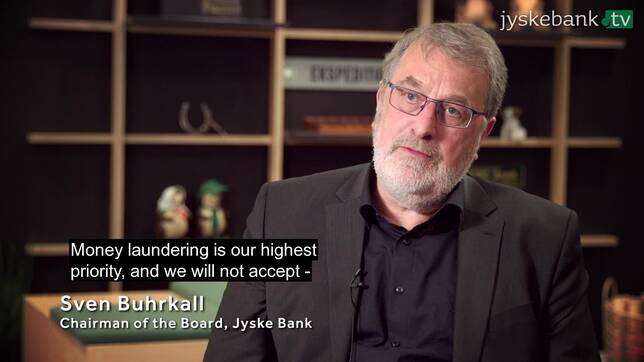 Prevention of money laundering has been given the highest priority by Jyske Bank, even if it comes at the cost of about 200 man years, says Sven Buhrkall, Chairman of Jyske Bank's Supervisory Board.

- In cooperation with Danish society as a whole, we have to perform the very important task of preventing money laundering and activities that finance terrorism, says the Chairman of the Supervisory Board.

The 12 team members receive on average 1,400 alerts each month, and about every sixth of these trigger a report to the Danish State Prosecutor for Serious Economic and International Crime.

An alert is triggered, for instance, by transfers of money to high-risk countries and transactions involving large cash amounts, explains Marianne Dyrby, Head of AML.

Almost 70% of the reports to the Danish State Prosecutor for Serious Economic and International Crime contains a cash element. Generally there are very few reports of suspicion of financing of terrorism, while reports of money laundering, particularly based on suspicion of social security fraud or tax evasion account, by far, for the majority of all reports.

In its efforts to prevent money laundering, Jyske Bank has decided to do away with the 1000 krone note.

Shady transactions or other criminal behaviour often involve cash transactions. In Denmark, particularly the 1000 krone note and in Europe the 500 euro note are used for such purposes.

Clients can still deposit 1000 krone notes at the cashier’s desk and the ATMs.

A cashless bank without outdoor ATMs

Without cash undeclared work can be minimised and
bank robberies and theft can be avoided. Consequently, Jyske Bank closed down its last tills and the outdoor ATMs in the spring of 2019.

In future clients can withdraw and deposit cash in a comfortable environment in our entrance halls.

Corporate clients at Jyske Bank must basically employ an auditor recognised by Jyske Bank, i.e. a registered accountant or a state-authorised public accountant.

Jyske Bank wants to contribute to preventing money laundering and fraud in connection with taxes and duties. Therefore, we have made information about an approved accountant to a key demand because it signals that the business is professional and intends to follow current legislation.